listed in order from present to previous 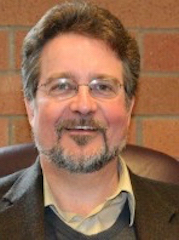 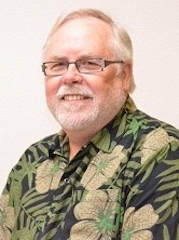 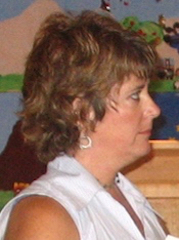 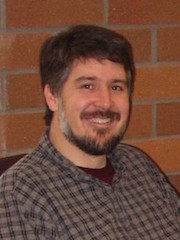 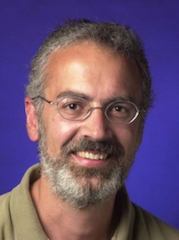 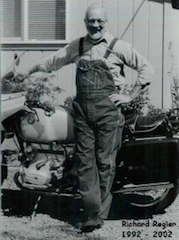 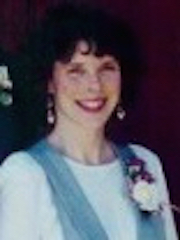 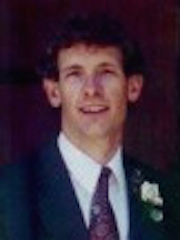 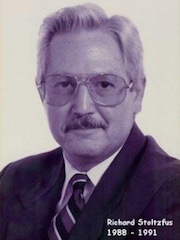 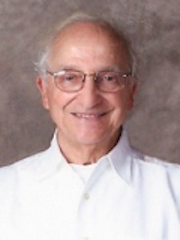 Steve Good (youth pastor and interim)
Born: Marianna, Florida November, 1958
Parents: Parents: Wilmer and Lila (Birky) Good
Baptized: 1971 at Hopewell Mennonite Church in Kouts, Indiana
Married: Pamela Liby
Ordained: Licensed for pastoral ministry in February 1987; served as interim pastor following John Oyer's leaving.
Present:
Service: Zion: July 1983 to August 1988. Following 9 months in seminary, served 5 years at Zion, 3 years as pastor at Northside Mennonite Church in Lima, Ohio; 10 years as pastor of Wayland Mennonite Church in Wayland, Iowa and the Pastor of Sunnyslope for a little over 3 years (December 2005)
Comments: Zion is to be commended for going out on the limb with a young couple from Goshen College. We have been in ministry now for 22 years and counting. Thanks for risking with us in this great adventure. Zion will always hold a special place in our hearts and we greatly appreciate your encouragement and love. Peace Steve Good 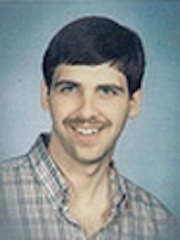 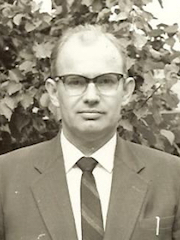 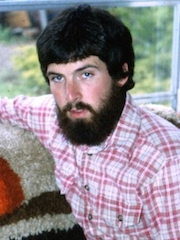 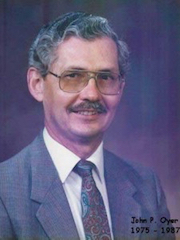 Paul Brunner Photos:  <Paul and Grace 50th Wedding Anniversary>, <Children in Oregon>
Born: July 24, 1925 in Blooming Glen, Pennsylvania
Parents: Edgar and Anna (Derstine) Brunner.
Married: Grace Derstine, born July 12, 1930 - Kitchener, Ontario to Clayton and Mary Derstine
Baptized:
Ordained: Minister
Service: Graduated from Goshen Biblical Seminary in 1956
Pastored at the Wooster Mennonite Church 1957-1965
Zion Mennonite Church 1966 -1975
Whitestone Mennonite Church -1975 -1982
Beech Mennonite Church -1983 - 1991. It was at the Beech Church that Grace was also ordained and a team ministry began and extended for the rest of their active years.
After leaving the Beech Church, Paul and Grace began eight years of interim pastoring in six areas of the country, retiring in 1999 in Hesston, Kansas.
Present: Grace is living at Showalter Villa and active at Hesston Mennonite Church
and in various Conference assignments. They also spent some hours helping their daughter who owned the Sunflower Patch in Hesston. Two children: Scott, born May 14, 1963 has 2 children and lives in Canton, Ohio and Beverly Ann Goertzen, born November 17, 1960 has 3 children and lives in Hesston, Kansas.
Died:  September 14, 2014 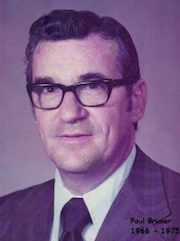 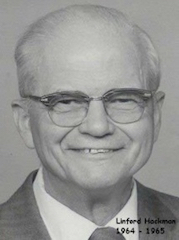 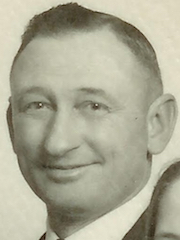 John M. Lederach
Born: March,1932, In Norristown, Pennsylvania. Moved to Lederach, Pennsylvania, the village of his family at age 11.
Parents: Willis K. and Mary (Mensch) Lederach.
Baptized: 1945 at the Salford Mennonite Church in Lower Salford Township near Lederach, Pennsylvania by Bishop John E. Lapp.
Married: Naomi Kauffman on May 16, 1954 at Clinton Brick Mennonite Church by A. H. Kauffman, Naomi's father.
Children: John Paul, April 17, 1955 (in Elkhart, Indiana); Philip Kauffman, February 13, 1957 (in Elkhart, Indiana); Elizabeth Marie, born March 13, 1961 (in Silverton, Oregon)
Ordained: Minister at the Sunnyside Mennonite Church, Elkhart, Indiana, by Bishop S. J. Hostetler on August 7, 1955, by the Indian-Michigan Conference. He was 23 years old.
Installed as pastor at Zion, December 8, 1957. Ordained bishop September 11, 1960 at Zion, by Bishop C. I. Kropf of Zion and N. M. Birkey from Fairview, (Albany). John was Zion's last bishop, as that position was gradually phased out and replaced by Overseers and Conference Ministers.
Service: Pastor at Zion from September 1957 until August 1966, when they returned to Seminary at Goshen Biblical and Associated Mennonite Biblical Seminaries in Elkhart Indiana.
After Zion: Following Seminary they lived for 18 months in Winston-Salem, North Carolina where John was in a graduate program in Clinical Pastoral Education,
In 1968 the family moved to Hesston College where John became Campus Pastor, administrator and faculty member and Naomi taught in the Nursing Department. They stayed at Hesston College for 16 years. In 1978 John earned a Doctor of Ministry degree from San Francisco Theological Seminary.
In 1984 they moved to Pennsylvania to Philhaven Hospital and established "Recovery of Hope", an intensive marital therapy program. Both John and Naomi were Senior Therapists at Philhaven. In 1994 they moved to Belfast, Northern Ireland and lived on a "Peace Line" working for "The Mediation Network for Northern Ireland."
They were called to extend their years in N. Ireland, serving with the Greenfield Community in Portadown, Northern Ireland, A small Anabaptist congregation.
Present: Presently John and Naomi are retired and living in Goshen, Indiana. They are Overseers in the Indiana Michigan Conference, Ambassadors for Goshen College, Elder in the College Mennonite Church, also working with a Listening and Reconciliation committee, volunteering for many jobs. They are hosts for TourMagination. John is adjunct faculty at Associated Mennonite Seminary. He was awarded "Emeritus Faculty" at Hesston College and was chosen for "Founders Lifetime Service Award" at Eastern Mennonite High School in 2005. Both John and Naomi are still preaching, teaching and holding retreats. "Life has been so very good and much of what we were able to do over these past 50 plus years all started at Zion Mennonite Church." 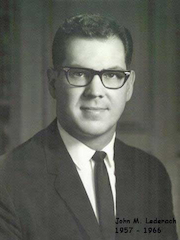 *Note: All of the following men were ordained, usually by lot, from within the membership of the congregation or had moved in as ordained men and all were self-supporting. Changes were occurring throughout the Mennonite Church by the 1950s and things began to be done differently. At Zion, Edward Yoder had moved to Ohio in 1954; Clarence Kropf turned 65 in 1950. Ministerial help was becoming limited, especially as outreach was expanded to include two mission churches. After consultation with Sanford C. Yoder, churchman from Goshen, Indiana and an affirmative vote from the congregation, the decision was made to call and fully support a pastor from outside the local congregation. This was a time of new beginning. Not only was a salaried minister called; he also had seminary training.
Charles Edward (Kelly) Kenagy
Born: November 18, 1914, east of Hubbard, Oregon.
Parents: William and Emma (Troyer) Kenagy.
Married: Edna Gingerich (born May 19, 1917) May 29, 1940, Hesston, Kansas.
Present: Kelly and Edna retired to live in Silverton, Oregon.
Baptized: October 17, 1920, in Rock Creek below the Zion Church, by A. P. Troyer.
Ordained: Minister July 17, 1949, at Zion.
Service: Soon after his ordination, he was asked to start a Sunday school in the Silverton Hills, east of Silverton, Oregon. He served there and preached at Zion as well until about 1955 when he moved his family to the Silverton Hills community.
Died:  March 4, 2008 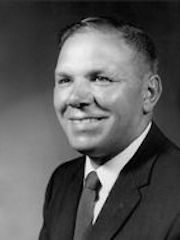 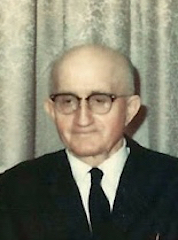 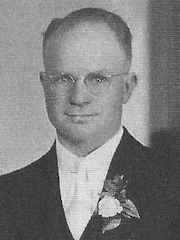 Paul N. Roth
Born: September 8, 1900, Albany, Oregon.
Parents: Martin and Rosina (Neuschwander) Roth.
Married: Velma Burck (May 12, 1904 - October 1984) May 13, 1923, Hubbard, Or
Baptized: As a young person at Fairview Mennonite Church, Albany, Oregon.
Ordained: Minister August 31, 1924, at and for the Portland, OR Mennonite Mission congregation.
Service: The Roth family left Portland and moved east of Hubbard where they were received as members at Zion December 13, 1936 and Paul was accepted as a minister as well. He served until the summer of 1946 when he withdrew from Zion.
Died: November 28, 1979; buried Lincoln Memorial Park, Portland, Oregon. 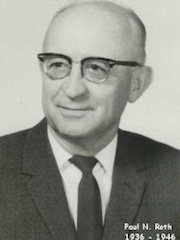 Christian G. Yoder
Born: December 7, 1887, Belleville, Pennsylvania.
Parents: I. T. and Barbara (Allgyer) Yoder.
Married: Mayme M. Hostetler (March 21, 1895 - October 15, 1945) 1913 in Oregon.
Baptized: As a youth in Pennsylvania. Came to Oregon about 1912 as a single man. Transferred membership to Zion at that time. After marriage the family returned to and lived in Belleville, Pennsylvania, for several years, again returning to Oregon where he placed his membership with Zion on October 13, 1929.
Ordained: Deacon March 29, 1936.
Service: Until his death in 1946.
Died:  November 24, 1946, Salem, Oregon following a heart attack; buried at Zion. 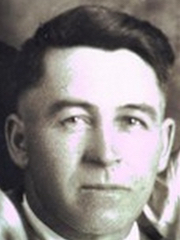 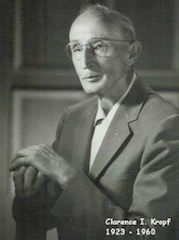 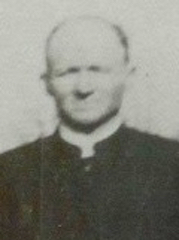 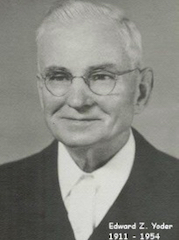 *Note: The following three men were all charter members of the Zion Amish-Mennonite Church when it was organized in June 1893.
Daniel  Roth
Born: April 30, 1868, near Glendale, Jefferson County, Iowa.
Parents: Joseph and Mary (Egli) Roth.
Married: Amanda Kauffman (December 13, 1876-Ju1y 1, 1955) January 25, 1900 at Hubbard, Oregon.
Baptized: 1883 in Stuttgart, Arkansas, where the family had moved after living for a time in Hickory County, Missouri. Daniel moved to Oregon in 1889 as a single man.
Ordained: Deacon on December 25,1900
Service: Until his death, although his services were limited in later years because of illness and disability.
Died:  October 14, 1923; burial in Zion cemetery.
Daniel J. Kropf
Born: March 3,1861, Baden, Ontario, Canada.
Parents: David and Magdalena (Oesch) Kropf.
Married: Anna Hostetler (March 24, 1866-March 5,1938) December 29,1885.
Baptized: 1879, Sycamore Grove congregation, Cass County, Missouri, by Jacob Kenagy.
Ordained: He and his young family moved to Oregon in November 1889. He was ordained minister in June 1893 in the same service that Amos Troyer was ordained deacon, by Joseph M. Schlegel.
Service: June 1893 - March 1911, when he moved to Harrisburg, Oregon and later, September 29, 1914, was ordained bishop there.
Died:  March 25, 1927; buried in the Alvord Cemetery, Harrisburg, Oregon. 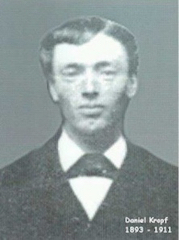 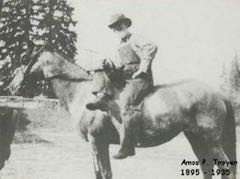 Joseph M. Schlegel
While neither a resident of Oregon nor a member at Zion, Joseph M. Schlegel was the person who led in the organization of the Zion congregation in 1893 and held bishop oversight until mid-1895.
Born: November 11, 1837, near Mulhausen, Alsace, Germany.
Parents: Joseph and Melinda Schlegel.
Married: Mary Miller (February 14, 1847-Apri1 25,1923) August 23, 1863.
Baptized: Immigrated to Ontario, Canada, with parents at age 17; later moved to David County, Iowa. Became a Christian and was baptized into the Amish-Mennonite Church as a youth, probably while living in Ontario.
Ordained: Minister, 1867; bishop, 1868, both at Wayland, Iowa. In 1879 he moved to Nebraska where in later years he served his conference district as an itinerant evangelist among and to the scattered Mennonites in the West; thus he made more than one trip to Oregon in that work.
Service: June 1893 to December 1895.
Died:  December 23, 1913, at Milford, Nebraska. 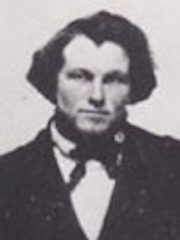