Not the Mennonite World Conference! I mean the half-day tour during the Conference to Gettysburg, the battlefield where the turning point of the American Civil War occurred? Did I sign up for that only to indulge my curiosity in all things historical? Such questions ran through my mind as the bus pulled away from the Farm Expo Complex in Harrisburg, PA. I had paid for the tour when I registered for the conference, several months earlier, so I might as well get my money’s worth, I thought.

I did, and then some. Not just for the excellent information and reflection given by the tour guide about the battle, the war, and the experience of that “fiery trial” for the peace churches in the area. Ironically, in several major battles of the Civil War, sanctuaries of the Brethren In Christ, known then as “Dunkards,” were focal points of heavy fighting. BIC churches are historical Anabaptist churches and members of MWC.

The road along the famous Cemetery Ridge, where the center of the Union Army line held against the determined, costly and futile charge of Confederate infantry, could be named “Monument Lane,” for all the statues, buildings and signs now marking the gentle rise in the land. Segments remain of the stone wall behind which the soldiers in blue fired and fought, and which was briefly breached by a tiny segment of the overall Confederate attack. 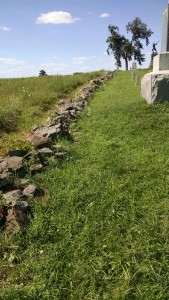 That low, unimpressive wall was the high water mark of the Southern force of arms, from which the tide of war turned in the Union’s favor.

The markers, statues and monuments to the units which fought, the commanders who led, and the soldiers who died there, are more than historical witnesses to events long past. From the crowds still thronging them, and the trinkets, flowers and other mementos left on and around them by people who treasured the meaning of the place, and perhaps some ancestor who died there, one can sense that the Gettysburg battlefield is an open air shrine. It is the sanctuary of a national religion, sealed in human sacrifice.

I cannot help but admire the courage, discipline, devotion and sacrifice of those who followed the call to arms to their deaths on such battlefields. I ask myself if I likewise am committed to something or Someone to the point of being similarly willing to die. To paraphrase Dr. Martin Luther King, Jr., if we consider nothing worth dying for, have we anything worth living for?

The nine saints who were shot to death in their South Carolina A.M.E. church this summer, by someone devoted to the flag and the slavery of the Confederate States, did so die. On their sacrifice, and the forgiveness of their friends and families toward the killer, the question of a cause worth dying for turns.

The trip to Gettysburg left me, a pastor committed all the more to a peace church and a peace theology, with some questions. Do I hold the cause of Christ still worth dying for? The Christ who died for me? If so, what does the cause of Christ cost me? What deaths, loss, suffering and struggle do I accept, even daily, in Christ’s warfare against war? I would never denigrate the emotional attachment that descendants of those who fought and died there feel to Gettysburg, with all the pride and poignant grief that such a heritage would entail. I understand how a Union soldier, reflecting on the courage and commitment of his enemies in grey, said that they “were worthy of a better cause.” But can we now commit as much courage, discipline and devotion to Christ’s cause, which does not require killing others, which would even put a stop to it?

I left Gettysburg still believing that worldly warfare is the wrong war fought with the wrong weapons against the wrong enemy. Yet how strategically and sacrificially am I, as “a good soldier of Christ Jesus” (2 Tim. 2:3) engaged in the right fight, with the right weapons, against the right enemies (Eph. 6: 10-20)? Who are my heroes, leaders and allies in the “good fight of faith?”

Maybe it was no accident that that very same week, in my devotional guide, I read this prayer of John Henry Newman, about other “good soldiers of Christ Jesus,” the kind whom I most hope to emulate: “The martyrs, the confessors of the church, bishops, evangelists, doctors, preachers, monks, hermits, ascetical teachers lived on Thy very Name of Jesus as food, as medicine, as fragrance, as life, as light from the dead…may I cease to be an exception in Thy great family, which is ever adoring, praising and loving Thee. Amen.”