THE MYSTERY OF THE MISSING NEIGHBORHOOD(S)

Walking out of the Convention Center in Kansas City, during the recent biennial delegate conference for Mennonite Church USA, I was struck by the sight of the big grey stone block building across the street, 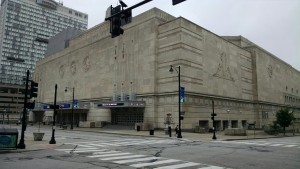 with the words, “Music Hall,” chiseled in the wall. Wasn’t that where the Kansas City Philharmonic Orchestra had played long ago? My wife, Becky, grew up in the North Kansas City area, while my family moved to KCMO for my father’s job in the bass section of the symphony when I was two years old (We moved away when I was 12). A worker in the Convention Center confirmed that, yes, the old Philharmonic did play there, before the Symphony was dissolved in some 35 years ago, and then restarted a few years later. Now they play down the street at the Kauffman Center.

Names came back to mind as I viewed the building, such as that of my first violin teacher, Jim Hammond, a violist with the symphony, and the conductor, Hans Schwieger, one of more than a few refugee artists who fled Hitler’s Germany, for reasons of faith or conscience, who found asylum and a venue to perform in America. Thus Germany’s loss was Kansas City’s gain. May such artists of conscience ever be remembered in honor. Sunday evening radio programs of the Kansas City Philharmonic were always announced with strains of  Der Rosenkavalier Waltz by Richard Strauss.

As I would walk between the Convention Center and the Crown Center, where I was staying, I remembered there having been teeming tenements, brownstones and apartment buildings, some 4 or more stories high, in blocks that were heavily Hispanic, Slavic, Italian, Jewish and African-American. Most of them had corner grocery stores and small businesses, like Atcheley’s Music Shop (now long gone), crowded with instruments for sale, or in various states of repair, and with sheet music, in shelves or in piles. It was a cluttered, dusty, busy place. My first violin probably came from there.

Now, most of the blocks between the Kansas City Convention Center, at 12th Street, on down to 31st are either empty and paved over, among which stand a few isolated warehouses, bars, businesses, transit centers like Union Train Station (still a grand work of architecture), 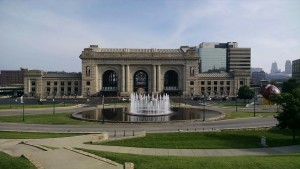 What happened to cause square miles of gritty, vibrant neighborhoods to disappear?

As Black Americans moved from the South into northern industrial cities, they inherited neighborhoods and apartment buildings that were already worn hard by age and often neglected by absentee landlords. As they grew in number and moved out, seeking homes to rent or buy, racism and white flight generated an economic bonanza for real estate companies, some of whose agents would call homeowners unsolicited to say, “You-know-who just moved into your neighborhood; don’t you think that now is the best time to sell? We have just the home and just the neighborhood for people like you and me, if you know what I mean.” Banks would also “redline” Black or transitional neighborhoods, often lending only to Whites, so that homes, as well as apartment buildings, were most often owned by outside, absentee landlords. And then people would say, “See! They can’t even take care of where they live!”

All that was perfectly legal in the 1950’s and 60’s. If any agent did not play along with that game, the Board of Realtors might well appeal to the state to pull his or her real estate license. Residents and businesses leaving for the suburbs took the tax base with them, so that anything the cities did to balance the books, like raising taxes or cutting services, would only send more people packing. White flight led to ghettoization led to urban decay led to the demolition of entire blocks of homes and apartment buildings, leaving empty shells around the downtown core of cities like Detroit, Buffalo and Kansas City.

Global corporations, like Hallmark, in the case of Kansas City, would later buy blighted inner city land and construct office buildings, convention centers, sports stadiums, shopping malls, hospitals and major medical centers, often with tax breaks, bringing some tax base back into the cities, but adding to the further dispersal of residential populations out into the outer urban edges and suburbs, where neighborhoods are chopped up by freeways, four-lanes and shopping centers, and everyone needs a car  just to shop for food.

Thus the mystery of the missing neighborhoods. And while we at the biennial convention were debating and discussing various peace and justice matters, I was feeling something of a disconnect, doing so in a giant, stainless steel corporate convention center standing on the very site of neighborhoods that had been wiped out by racism and racketeering just as surely as if they had been carpet-bombed. That’s why they called it “block-busting.”